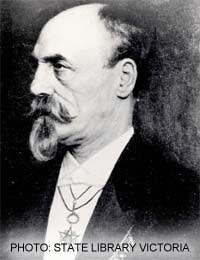 A man in a dark, elegant suit steps forward into the footlights, his carriage erect and his eyes glinting with some hidden amusement. His movements are sure and well rehearsed as his hands produce a flapping dove from, it seems, the thin air.

His appearance causes more than a few rapid heart beats, however, as audiences wonder if Compars Hermann’s magical ability comes not from practice, but from a pact with the underworld.

Behind every great magician stands his inspiration, the magician he looked upon as “great” - and behind Hermann the Great there stood his older brother and mentor, Compars Hermann, the first to bring fame to the name with magic.

Compars father was Samuel Hermann, an Austrian physician who dabbled in sleight of hand and other forms of magic. It was more or less a curiosity for Dr. Hermann, who entertained his rich clients with his skills, and occasionally performed for royalty of various European nations.

He passed some of the secret knowledge down to his oldest son, Compars, whom he planed on becoming a doctor like himself. Much to Samuel’s chagrin, Compars preferred the idea of becoming a full time, professional magician rather than a doctor.

Compars, born January 23, 1816, was a very good magician. His elegance and breeding helped to elevate the art at a time when many magicians were more interested in proclaiming themselves sorcerers in communion with dark arts.

Ironically Compars had the look of “old Scratch” himself, his Van Dyke goatee and curly moustache - along with an angular face and thin frame - were occasionally referred to as a “Satanic” appearance. This only served to elevate the exotic nature of his performances.

The Hermann look was the same passed down to his younger brother, Alexander, who began acting him Compars’ stage shows at an early age. There was a sixteen year gap between the brothers, so while Compars was an adult performing his act, Alexander was a young child that was part of the act.

This infuriated his father, who refused to lose another of his children to the magic arts. Once again, however, the enchantment of a life of magic was greater than the threat of patronly retribution, and Alexander, also, left home for a life of magic, in the employ of his older brother.

Alexander grew up on stage and in the wings, learning the craft of magic from his very successful brother. Compars was, like his father before him, the guest of royalty - but even more so. Performances before royal families of Europe lead to great gifts of jewellery and other artefacts - a tradition carried on by his younger brother as well.

Compars died June 8, 1887, leaving the task of perpetuating the mysticism of the Hermann name to his little brother. He could not have left them in more capable hands. Alexander soon became even greater than Compars had been, in direct competition with Harry Kellar for being America’s most beloved magician.

The appellation of “Great” to Hermann’s name was not for style - Alexander was one of the greatest magicians of all time, both in ability and marketability. But Hermann the Great would never have been if it were not for the great ability and skills of the earlier Hermann, his older brother Compars.