The Rules of Magic 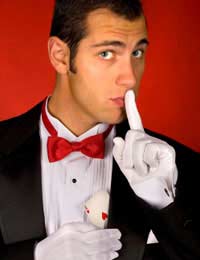 The real secret to any and all magic tricks is the devotion magicians have to following the rules of magic.

A better title for this rule would be “Practice Infinity”, because a magician should never stop practicing. Specifically, as the rules apply to individual tricks, this is arguably the most important rule. Performing a trick in a sloppy manner does not make one a magician, it makes one sloppy and will not impress the audience.

Knowing how a trick works and being able to make it work are two different worlds - you may find you have learned a trick and it is beyond your ability to perform; in this case do not, under any circumstance, perform this trick. Learn it until you know you can do it every time without mistakes and then practice it some more. This may sound a bit overboard but in truth this is what the great magicians do - they are in a very real sense perfectionists when it comes to magic.

One Trick per Audience

Showing the same audience a trick for a second time can be disastrous. No matter how many times they ask, do not repeat a trick a second time, unless the trick is specifically designed to be repeated (usually because a different, surprise effect comes about in the repeated performance.) Much of magic depends on something happening that the audience isn’t looking for and the second time around they will be looking for it, guaranteed. If you amaze your audience with a trick and then they figure it out the second time around, it takes away from your accomplishment and is as if you messed it up the first time.

This rule applies both literally and figuratively. Many tricks that depend on sleight of hand also depend on angles and point of view. If your hands are turned a certain way it may expose the secret of the trick to someone to your left, for example.

As to the figurative meaning, keep in mind at all times what the audience is thinking and seeing - are your fingernails clean and trimmed? Clothes clean and pressed? Do you talk too loud during a trick, or too softly? Correcting these things is the mark of a dedicated magician.

Never tell the secret of a magic trick - without good reason. To prove that you know something your audience does not is not a good reason - you already proved that when the audience clapped and asked, amazed, “how do you do that?” If you randomly and thoughtlessly expose the secret of your magic, a number of things happen: first, the audience loses its sense of wonder, which is counter productive to the entire point of magic. Second, this audience is now ruined for the next magician that comes along and does the same or similar trick - just wait until you try to perform a trick and someone in the audience yells out the secret in the middle of it to see how you like it.

Now, what are good reasons? The only really good reason to tell the secret of the trick is to teach the trick to someone who is willing to learn. Willing to learn means willing to follow the rules- including this one- so don’t tell unless you are going to teach, and make wise choices about who you teach to.