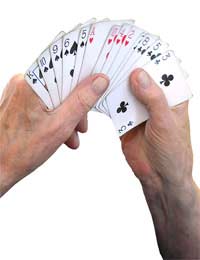 A magician must always be in control while appearing to not be in control, and to make that work he or she must perfect the “Magician’s Choice.” This is not a trick so much as a tool, or even more accurately, an idea, one that will come in handy for a lifetime of magic.

The secret to the Magician’s Choice is that it is a false choice, one which the magician only appears to be giving to the spectator. The magician is in control of the outcome of the choice from the beginning.

The Magician’s Choice can be done with any number of trick, so the materials will vary based on the trick being performed.

A complete understanding of the Magician’s Choice concept is required, and practice in at least one trick.

To illustrate the Magician’s Choice let us take a look at the trick performed above under “Effect.”

The trick is to never let on before the choice whether or not the spectator’s choice is going to mean a card is kept or a card is tossed away.